Fantastic Five Friday is a new weekly meme hosted by Anna at The Weekly Enthusiast. You can take part even if you don’t have your own blog: just comment on her FFF post of the week!

Five Favourite Guest Stars Who Only Appeared for One Episode

This is a tough one as guest stars don’t generally leave that much of an impression, so let’s see what I can dig up from my memory.

I love Michael Weatherly in NCIS, so imagine my surprise when watching Charmed’s earlier seasons to find him as a guest star! The character he played, Brendan Rowe, was also pretty awesome: a demon who just wants to be good. Plus he had a romance thing with my favourite sister, Prue.

Lara Pulver as Irene Adler is pretty freaking brilliant. Of course, she’s a female character written by Steven Moffat, so there’s some moments where she could be so much more, but overall pretty freaking bamf. 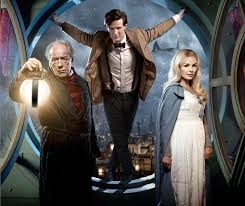 3. Michael Gambon in Doctor Who: A Christmas Carol

It’s Dumbledore on Doctor Who! Even if he’s not my Dumbledore (nor my Doctor for that matter), but still! I love it when my favourite fandoms collide.

Speaking of when fandoms collide. When Colin Morgan who plays Merlin in BBC’s Merlin showed up on Doctor Who I didn’t notice. Because I’m dumb. I was like “this boy looks vaguely familiar.” And then it hit me, and I loved it.

Sawyer was my second favourite character on LOST (my first, of course, was Charlie), so when he showed up on Community my heart exploded from fangirl emotions. Even now… *faints*